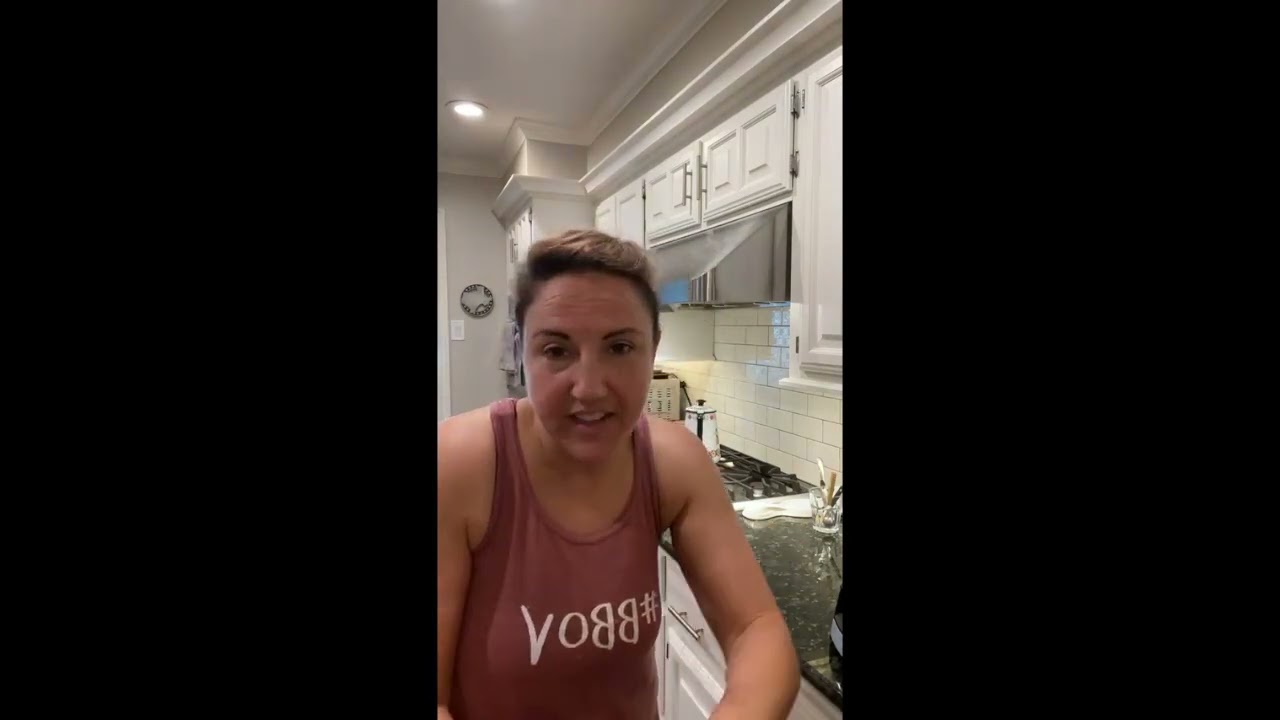 I don't know about y'all, but I just cannot do shake in the late fall/winter. It's too too cold for me! But when spring finally comes around my blender starts getting a lot more love. Last summer I worked and worked on this shake, and just couldn't get it to taste not healthy, but today I subbed out the frozen peaches I had been experimenting with for frozen mango and BAM! Deliciousness!!! And you can't even taste the THM Dynamic Duo Power Greens! Here's the recipe: CHEERFUL
1,156 views3 comments

Fruit Punch Ya Right in the Gut!

I grew up being a type 1 diabetic from the age of three in the early 80's. Crystal Light came to being sometime when I first started elementary school, and I loved me some Crystal Light Lemonade and some Crystal Light Fruit Punch! I've been trying for a while to recreate the yummy fruit punch of my childhood, and y'all, I've finally done it! IT'S CRYSTAL LIGHT WITHOUT BEING FULL OF CRAPPY SWEETENERS THAT HASTEN OUR DEMISE!!!!!! Here's the eeeeeeasy breezy recipe. You can have
729 views0 comments

Ohhhhhh Cheerful Health Mamas, have I got a massive treat for y'all today!!! Queens Pearl and Serene (creators of Trim Healthy Mama) have done it again with their No Carb Easy Bread! This bread is delicious--it is like real bread but without any carbs which means that those of us who's bodies don't work well with grains can have all of this that we want! AND it's low carb and low fat so really doesn't cause a change in blood sugar levels which is wonderful for us diabetics! I
3,867 views2 comments

Hey sis! I'm so excited to share a SUPER SIMPLE recipe that makes an appearance at all of our holiday meals to much acclaim and sighs of appreciation. This savory recipe is easy and quick to make! Sweet potatoes are an amazing superfood that packs a lotta bang for your buck. Here's a little info about them that you may not have already know (taken directly from Healthline.com): 1. Sweet potatoes are starchy root vegetables that are rich in fiber, vitamins, and minerals. They’
306 views0 comments

Lovely lentils are a wonderful legume that is so incredibly gentle on blood sugar. There are many different kinds of lentils--brown, red, green, French (called du Puy), yellow (used mostly in Indian cooking), and finally black lentils (called Beluga because they resemble caviar). Each of colors of lentils requires different cooking times--some cook as quickly as 15 minutes because they have softer outside shells and other take three times as long because they have a harder ou
1,345 views2 comments

Hi Cheerful Health Mamas! Anyone out there feeling a little lost as to how to start or how to get back into the Trim Healthy Mama way of eating? Confused by all those letters? Just can seem to get going again after a time away? Anyone's blood sugar been a little crazy lately?! I've got just the solution for you. I am going to be opening up a 6 week coaching group in May for those who are beginners, re-starting THM, or those who have blood sugar issues (like all types of diabe
66 views0 comments

Down for the Count: How to Figure Out Carbs in THM Recipes

Hi Cheerful Health friends! I've current got several 1-1 clients who either are diabetic of some sort or have family members who are diabetic so I thought I'd do a tutorial on how I help them AND help myself to find the carb counts for the THM recipes which is helpful in figuring out insulin doses (amongst other things!). This can easily overwhelm you if you're just at the beginning of your diabetes journey, but don't let it be. You're working on 1 recipe at a time--not a who
340 views0 comments

Hi friends! I have recently been diagnosed with Hashimotos Thyroiditis, and am starting my fourth week of doing a Whole 30 with THM principles (so fuel separation still in play for the most part). I've felt a lot better (fewer headaches and less grouchy tummy and way more steady blood sugars) since cutting dairy and grains out so I'll be continuing on that trend for a while. I had been enjoying have shredded zucchini/courgette in my PPP oatmeal in the fall, and the other I ha
410 views0 comments

With the holidays coming up, I've been experimenting in my kitchen with some yummy recipes for my upcoming Cheerful Health Holiday Accountability group. It turned out so very well that I thought I really just had to go ahead and share it! I tested it out of my family few weekends ago and no one could tell that it was sugar free! We even did a side-by-side comparison with some Braum's Gingerbread and we all agreed that the homemade was was bettah--duh! After having lived in th
160 views0 comments

Yesterday and today have been cooler in North Texas where we live. This is an odd phenomenon--already getting cool and it's still September in Texas?! Usually, September is one of the hottest months of the year. BUT I ain't lookin' that gift horse in the mouth, and I will be grateful and thankful for having to get out my cozy slippers this morning! For lunch today, I felt like whipping up some yummy pumpkin soup that I made a lot in the winters that I lived in the UK. It's re
247 views0 comments

We had a strange happening last week in North Texas where I lived--when I left for work it was only 56F outside at 9:00am on September 10th. THIS HAS NEVER HAPPENED IN MY WHOLE LIFE! It's usually hotter than blue blazes in Texas until early November. It was delightful though, and totally put me in the mood for all things pumpkin so I created a little variation on the THM Trimffles that the sisters came up with when chaffles were a big deal a while ago. Here is the original Tr
104 views0 comments

Hello Mamas! Pumpkin Spice Latte season is upon us! I lived overseas for 12 years and it wasn't often that I got to have a PSL although I would dream of them and be sad I was missing out while everyone was posting theirs like crazy all over Facebook. Well, my tastebuds have incredibly changed and now I find Starbucks PSL so sickly sweet that I don't even want it. But the other day I thought, "Self, I think we can mix one up on our own!" Here's the recipe I came up with. It is
256 views0 comments

Does your coffee do THIS?!

Hi everyone! Thanks for stopping by the Cheerful Health Blog. Today we are talking about a way to mix up your coffee in a way that makes it both fat burning AND energy giving. Who wouldn't want coffee that burns fat?! The secret is our friend, MCT (medium chain triglyceride) oil. I've talked with you about MCT oil in the past, but in case this is your first time hearing about MCT oil let me fill you in a little on all it's magnificent properties. 1) MCT oil is made of an amin
183 views0 comments

Here it is! I get asked for my recipe all that time so I thought I'd just make a video which shows you how I do it. It is VERY simple. I love the texture of chia seeds. They're like tomato seeds. I find you either love 'em or you hate 'em. Here's a recipe for all the lovers out there! (Also, anyone remember the Chia Pets song from the early 80's?!) Chia Pudding Recipe: Step 1: To make the chia seeds In a 6in x 6in x 3in container put: •7 tbl dry chia seeds •about 3 cups of wa
2,152 views2 comments

Hello all! I wanted to let you know of a group that My friend Kanada of Balanced Chaos Coaching and I are starting THIS COMING MONDAY, July 13th!! There is a $10 discount on offer if you sign up by tomorrow otherwise it is $60 for six weeks. That is $1.43 a day. This group is for those who are looking for some accountability for the rest of the summer. We cover six tweaks that will aid your health journey and get you back on track after this crazy covid season. We decided to
67 views0 comments

I have just started a new challenge for myself where I am adding in veggies to every meal for the next 30 days. Every meal means even breakfast! I whipped up this shake this morning and it was delicious so I thought I'd share the receipt here. This was an FP (Fuel Pull--low fat and low carbs), but it could easily be made into an S meal (Satiating--higher fat and lower carbs) with a few easy additions. The cocoa powder in here is full of polyphenols and flavanols which have p
2,671 views0 comments